1933
Attended the Schwarzwald school in Vienna

1938
"Annexation" of Austria by Germany
Together with her mother and her brother, Soshana flead from Vienna. Short stay in Switzerland and Paris.

1939
The family moved to England, where Soshana attended the Northwood College

1940
Chelsea Polytechnic School in London: Painting and drawing classes, training in fashion drawing.
While the air raid on London, Soshana created a series of paintings on the "Blitzkrieg".

1941
Emigration to the US
Soshana attended the Washington Irving High School, New York and started painting under the guidance of Beys Afroyim.

1944
Travelled together with Beys Afroyim through the US at the age of 17. They portrait authors, musicians, statesmen and scientists like Thomas Mann, Arnold Schönberg, Lion Feuchtwanger, Franz Werfel, Otto Klemperer, Bruno Walter, Theodore Dreiser, Hanns Eisler.
Opening of the UNO in San Francisco. Soshana portrayed some of the delegates.

1948
First large exhibition in the Circulo de Bellas Artes, Havanna.
For the exhibition Susanne Afroyim took the name her husband had given: "Soshana" as an artist name.

1949
Soshana, Beys and Amos left the US. They stayed in Holland, Austria, England, Poland, the Czechoslovak Republic and Israel.

1951
Study at the University of Applied Arts in Vienna

1952
Study at the Academy of Fine Arts in Vienna under the guidance of
Prof. Sergius Pauser, Albert P. Gütersloh and Prof. Herbert Boeckl

1954
Soshana was portrayed by Picasso

1956
Extensive travels to the Far East, to Asia, to India and to Japan.
High interest in Indian philosophy, Hinduism and Buddhism.

Soshana was strongly influenced by th calligraphic art of the Far East.
She learned art techniques on rice paper from Buddhist monks in Kyoto and Chinese painters in Hangzhou.

1957
• Exhibition in the Emperor's Palace, Beijing.
• Exhibitions in the Henry Lidchy Gallery, Johannesburg an in Edouard Loeb, Paris

1959
Soshana travelled through Africa. In Lambaréné she portrayed Albert Schweitzer.
Returned to Paris.Soshana started a close cooperation with the Italian painter Pinot Gallizio, they created around 20 paintings together.
Close contacts to the Cobra Group, among others to Karel Appel and Asger Jorn.
Collaboration with the O´Hana Gallery, London.

1960
• Exhibitions in Brazil, South and Central America.
• First exhibition in New York and in the Mitsubishi Gallery, Tokyo.

1962
Exhibition in the Musée Picasso, Antibes, South of France. 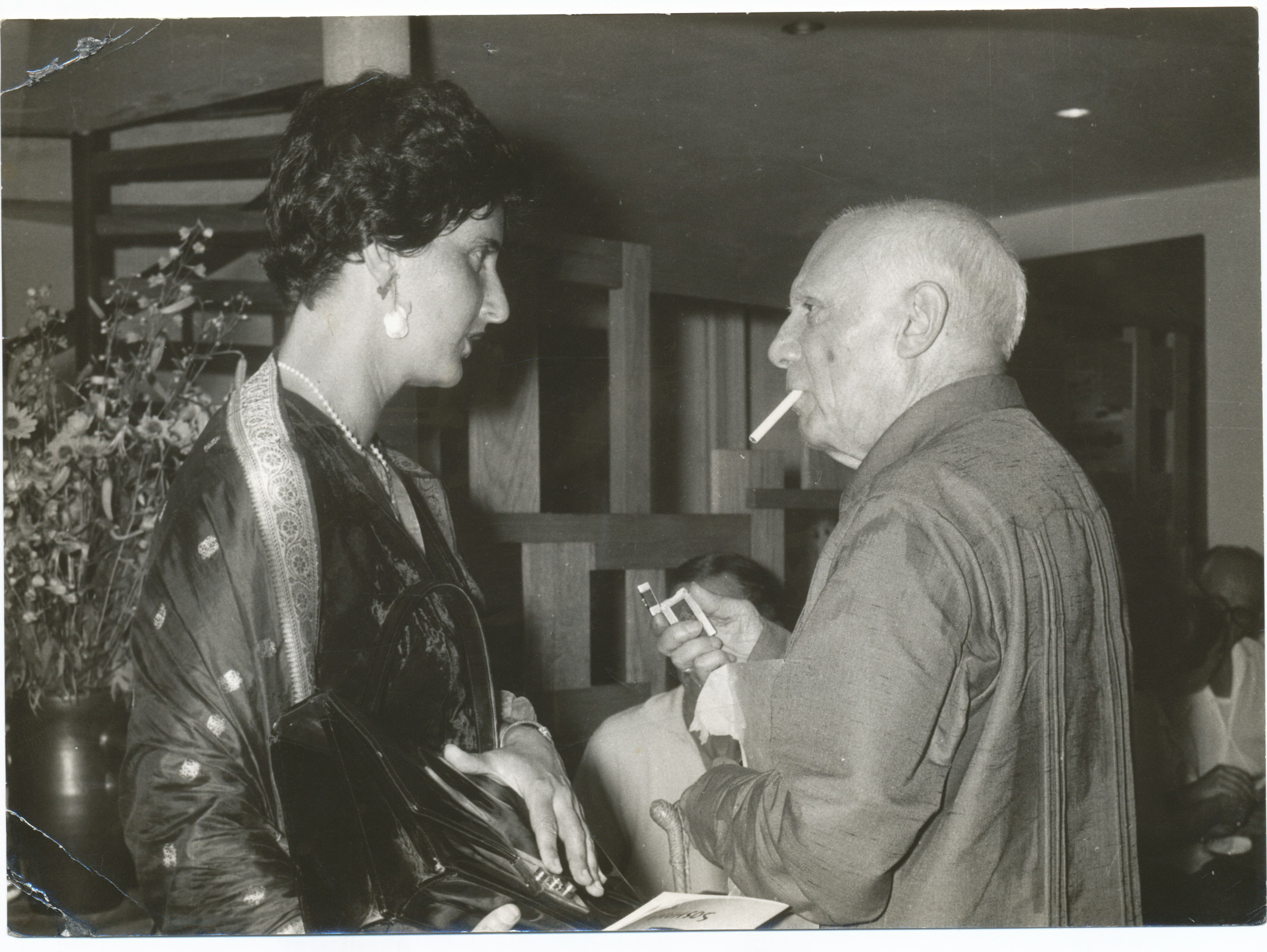 1968
Journey around the world, among others to the South Seas, the Caribbean, to Thailand, Bali, Australia, India, Sikkim, Nepal, Afghanistan, Iran and Israel
Portraits of the King and the Queen of Sikkim

1969
Concept of the three dimensional art from "Soma" in Paris, steel objects with relocatable magnets, design of acrylic glass objects.
Soshana became a member of the theosophical society.

1973
The Yom-Kippur war started on the day of the opening of her exhibition in the Old Jaffa Gallery, four planned exhibitions were prevented by the war.

1985
Soshana lived and worked in Vienna since 1985.
Contacted to other artists, she has known from her time in Paris such as Hans Staudacher, Hildegard and Harold Joos, as well as Trude Gill.
Worked on different projects, the collection of video and audio tapes, written records on her life and the development of the international art scene.

September 2nd, 2009 - Soshana received the Merit Award in Gold of the Province of Vienna

They had both suffered the horror and experienced the beautiful sides of the 20th century, said Dr. Andreas Mailath-Pokorny, City Council of Cultural Affairs in his speech. On the occasion of the presentation of high awards of the City of Vienna to the 82year old artist Soshana Afroyim (Merit Award in Gold of the Province of Vienna) and the 87year old psychologist and publicist Dr. Wilfried Daim (Medal of Honour of the Federal Capital) he expressed that both represented “an open-minded, humanistic attitude” even though they had different life stories.

May 27th, 2010 - Soshana received the Austrian Cross of Honour of the Republic of Austria for Science and Art. The award was presented to her by Dr. Bernd Hartmann, Austrian Ministry of Education, Culture and Art in the Maimonides Center

November 9th, 2010
Opening of the exhibition "Soshana-Lebenszeichen III" in the Prisma Gallery

October 4th, 2011
Exhibition "The Comeback of the Old Spirits" with Soshana at the Academy of Fine Arts, Vienna.
The idea of the production of a movie portraying Soshana was developed in cooperation with her. It shows the artist on her journeys and in her present life, constantly moving from memory to memory.

2012
• "I Am OK" Soshana’s new works – fresh, funky, expressive, and by no means old!
Curated by Leon Naffin and Hoa Luo, Screening of the film „Soshana“ by Cana Bilir-Meier and Julian Paul Stockinger, at GG68, Vienna/ Austria
• "Soshana - An Austrian artist in Paris"Paintings from 1950 to 1960, on the occasion of the artist's 85. birthday, Gallery Lilly's Art, Vienna/ Austria
• "Fluchtlinien. Arts and Trauma", Group Exhibition, Artfestival SOHO in Ottakring, Vienna/ Austria 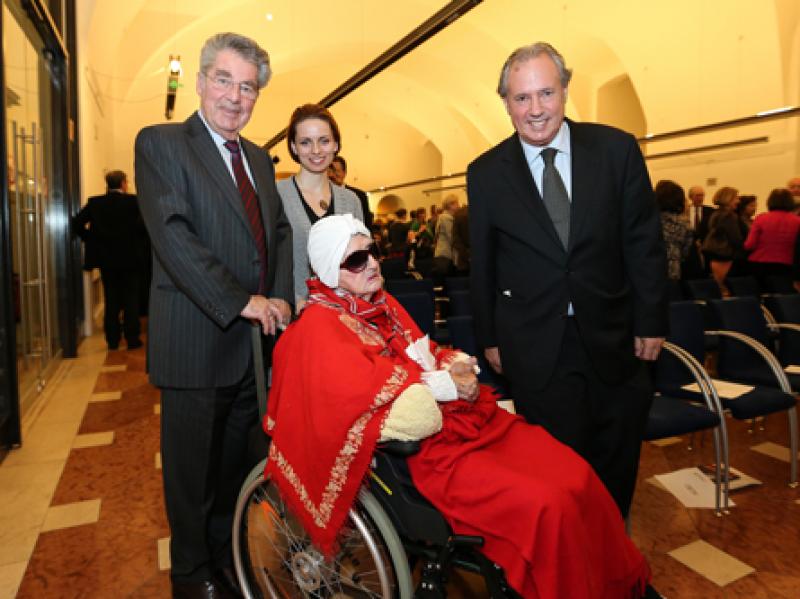 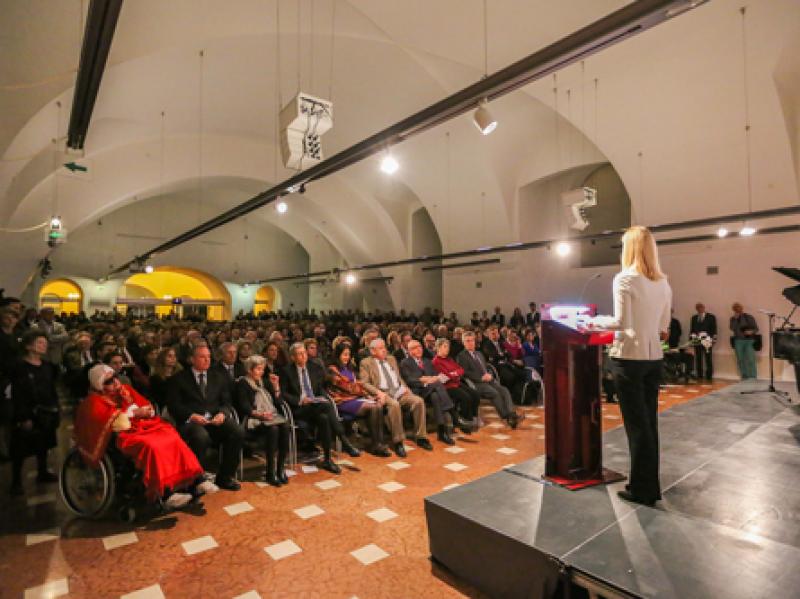 Soshana's Documentary Film"Everywhere Alone. The Artist Soshana" (covering 85 years of her life) has been finished after five years of intensive work! Produced by Werner Müller, it is a 45- minutes Documentary Film and will be shown at ORF Austrian Broadcasting Cooperation

2014
• "Soshana. A Viennese in Paris", Gallery Szaal, Vienna/ Austria
• "A Situation in Art in the 1950ies", Exhibition at the Galerie del Ponte, Torino/ Italy, Groupexhibition with Pinot Gallizio, Piero Simondo, Sandro Cherchi and Franco Garelli
• "Soshana. A Viennese in Paris" One Month from Soshana's diary, on September 10th 2014 at the Austrian National Library Vienna/ Austria (Premiere), Lection with Music: "One Month" from Soshana's diary 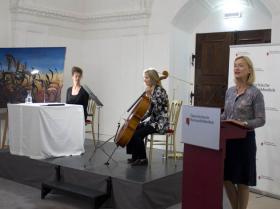 2nd October 2014: the ORF/3sat-Documentation "Everywhere alone. The Artist Soshana" won the "Silver Dolphin" in the category "Art, music and culture" of the Corporate Media & TV Awards 2014 in Cannes

2015
• Soloexhibition "SOSHANA. A LIFE. WORLDSTORIES", Deutschvilla Strobl at Wolfgangsee/ Austria
• Groupexhibition "Fear", with the 6AM Class of BG/BORG Perchtoldsdorf/ Austria (Mag. Ingrid Mauthner), at the auditorium of the School
• "Soshana. Festival: Bridges between generations", Theater Nestroyhof/Hamakom, Vienna, Soloexhibition and Presentation of the illustrated book Soshana: "I AM OK." blog with danceperformance by Silke Grabinger I Lection with Music "Soshana. A Viennese in Paris"- One Month from Soshana's diary by Hannah Hohloch and Maria Kainz (Cello) I The Documentaryfilm „Everywhere alone. The Painter Soshana"

On Wednesday, 9th December 2015 Soshana died in her 89th year of life in her place of birth Vienna.

"When I paint, I forget everything around me, I become one with the canvas and I express my pain and whatever I feel on this canvas. I feel better then."  - Soshana